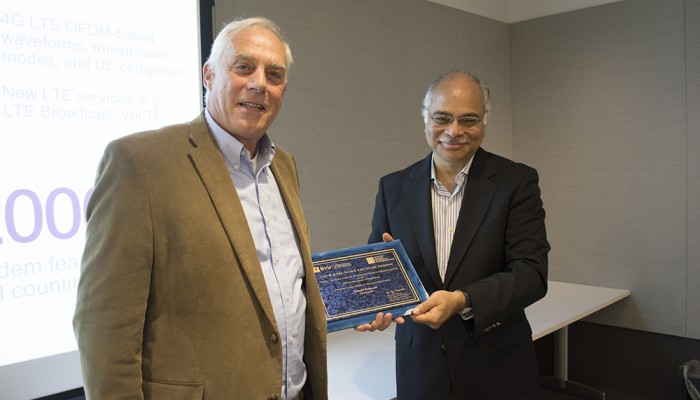 Dr. Roberto Padovani gave the prestigious Jack Keil Wolf Lecture on Wednesday in NYU Tandon’s brand new Makerspace. His presentation, “The Road to 5G,” focused on the standardization efforts the industry is making for next generation cellular technology or 5G.

Dr. Padovani is the Executive Vice President and Fellow at Qualcomm Technologies, Inc. He joined Qualcomm in 1986 and served as the company’s Chief Technology Officer from 2002 to 2011.

Jack Keil Wolf Lecture Series is in honor of an information theorist whose pivotal contributions to digital communication and data storage technology helped shape our networked world, was a member of the Electrical Engineering Department at New York University from 1963 to 1965, and the Polytechnic Institute of Brooklyn (now NYU Tandon School of Engineering) from 1965 to 1973. Dr. Wolf was elected to the National Academy of Engineering in 1993. He was the recipient of the 1990 E. H. Armstrong Achievement Award of the IEEE Communications Society and was co-recipient of the 1975 IEEE Information Theory Group Paper Award for the paper “Noiseless coding for correlated information sources” (co-authored with D. Slepian). He served on the Board of Governors of the IEEE Information Theory Group from 1970 to 1976 and from 1980 to 1986. Dr. Wolf was President of the IEEE Information Theory Group in 1974. He was International Chairman of Committee C of URSI from 1980 to 1983.