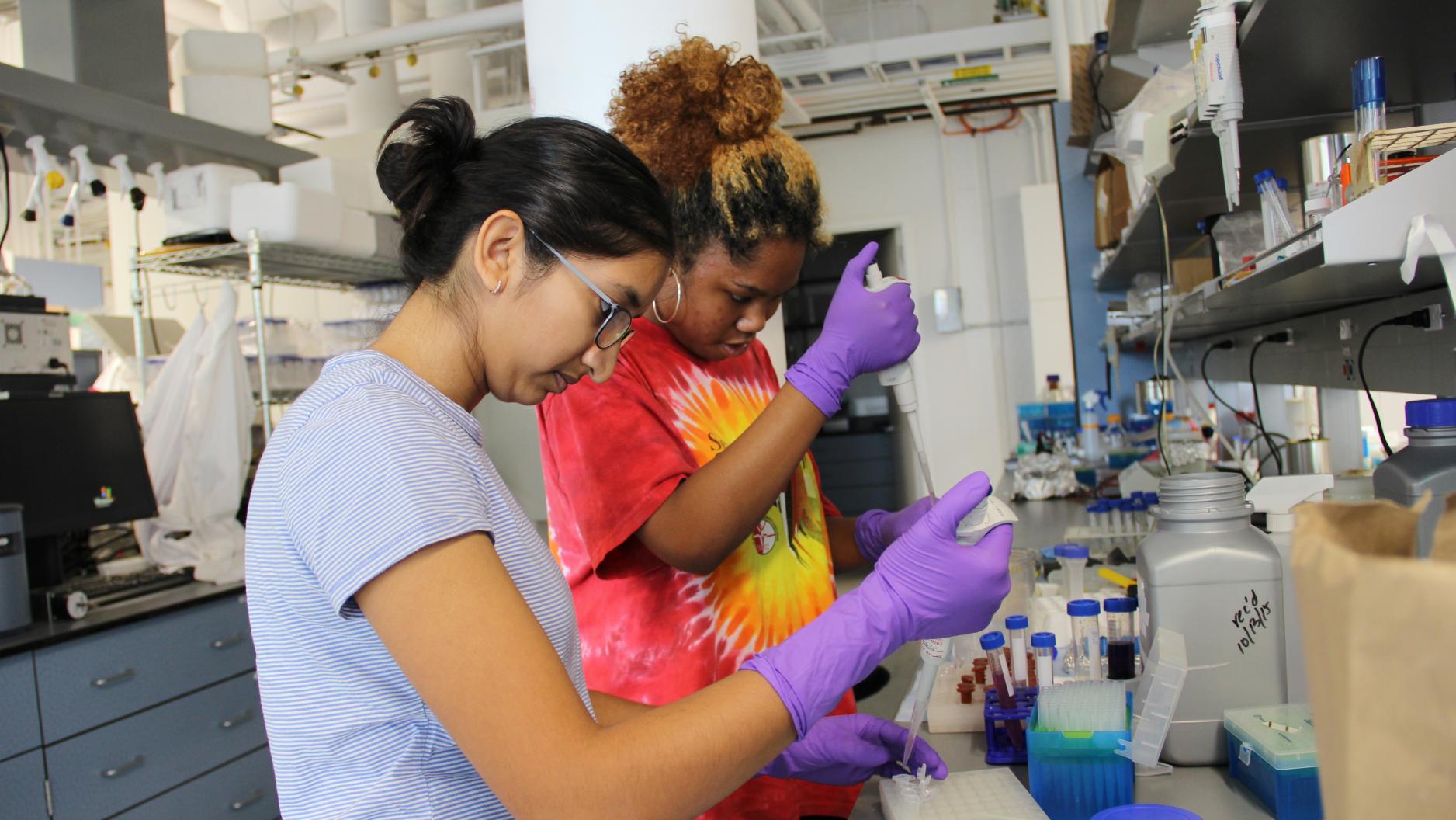 Jemima Costanza is now on a pre-med track. Maeve Farrell has set her sights on a career at a major research university. Edward Huang and Vicente Gomez are studying computer science as undergraduates. Amaya Munoz foresees a future as an electrical and computer engineer. Jamie Monroy views biotechnology as an exciting career path. The list could go on and on. After taking part in the Applied Research Innovations in Science and Engineering (ARISE) program as high school students, person after person begins to picture a career in the world of science, engineering, or technology one day.

Funded by a grant from the Pinkerton Foundation, ARISE was launched in 2013 by NYU’s Center for K12 STEM Education, with the aim of inviting rising juniors and seniors from New York City high schools into university labs to engage in high-level research. The seven-week program introduces them to the scientific method, data collection and analysis, lab safety, and ethics, and they are expected to make solid and useful contributions to their labs’ research objectives and daily operation. “We were individually mentored by graduate students and post-docs,” Gomez — who participated in ARISE in 2015 but whose connection to Tandon’s summer offerings stretches back even further, to when he participated in a program called Science of Smart Cities as a middle school student — recalls. “They did not sugarcoat the rigor a scientific career demands, and they didn’t take it easy on us simply because we were still in high school.”

ARISE — which recruits many students from demographic groups generally underrepresented in STEM disciplines, including women, students of color and those from low-income backgrounds — hosted 48 participants this summer, embedding them in a wide variety of faculty labs (see below) and assigning them Tandon graduate and post-doctoral mentors.

The resulting projects, presented to the public at the end of the program, ranged from assessing DNA extraction methods from museum specimens, to building sensors to study noise pollution in the city, to testing the effects of temperature and orientation on 3D printed parts and more.

Jason Mei of Stuyvesant High School and Xue Ye Lin of Brooklyn Tech, for example, worked with Professor of Chemical and Biomolecular Engineering Miguel Modestino, who recently garnered a 2017 Global Change Award from the H&M Foundation for his development of a method of using solar energy and plant waste, rather than fossil fuel, to synthesize nylon. The pair — both of whom aspire to study chemical engineering once they are in college — fabricated custom solar arrays that may one day be employed to scale up Modestino’s process. “You might think that high school students would not be capable of making any meaningful or practical contributions in a university lab, but these two have proven you wrong,” Modestino says. “Their help was invaluable, and I’d be happy to have many more like them.”

Like Modestino, many of the professors who volunteered to host ARISE students were amply impressed. For proof, look no further than the figures compiled by Ben Esner, the head of the Center for K12 STEM Education.

“This year, an unprecedented 16 labs and faculty members have asked their ARISE students to continue working on their research during the school year, even though the program has officially ended for the summer,” he explains. “Out of 48 students, 26 will be staying on, furthering their own learning, contributing to their mentors’ research, and proving that programs like this are an invaluable way to get and keep young people interested in STEM.”

Another Way to Spend the Summer

Pedro Velazquez took part in ARISE in the summer of 2015, back when he was a rising junior at Forest Hills High School in Queens. He had long been fascinated by science and studied biology at his school’s Carl Sagan Science/Math Honors Academy. He jumped at the chance to spend the summer at Tandon, conducting research in Professor Maurizio Porfiri’s Dynamical Systems Lab, where he did image analysis on novel polymers that change color when stressed — an area with great practical applicability in fields like infrastructure testing.

“The experience completely changed how I perceived being a scholar and researcher,” he recalled. “I used to think that to ‘know’ something you simply had to read about it and be able to summarize it. That was a real misperception. Almost anyone can memorize something by rote and spit it out. It’s an entirely different thing to gain a deep understanding of the topic and be able to present it to others concisely and clearly.”

While he enjoyed his time at Tandon and missed being in the lab here, this past summer, Velazquez attended a program of a different sort: one aimed at rising Cornell freshmen. He is attending the Ithaca school this semester and had been accepted into its demanding Summer Research Scholars Program. “Thanks to ARISE,” he says, “I knew I could do it and more than hold my own.”

At Tandon and NYU, researchers are happy to throw open their doors to the bright, motivated high school students of ARISE — a rarity when at many schools, even undergraduates might not get much of a chance to work with high-profile professors on important projects. This fall, ARISE participants from the summer will be returning to: